The exhibition greenhouse “Tropicana“ covers a total area of 2 400 m2. The exhibition greenhouses are 54 m long and 39 m wide, the planted area exceeds 2 100 m2. The rest is represented by an entrance hall, sanitary facilities and spaces for the greenhouse control room automatic and the garden handling system inaccessible to the public. Above the entrance to the greenhouse there is a stone plastic of the Maya good Yum Kaax (pronunciation is jum káš), the protector of wild (mainly utilitarian) plants and hunting game. 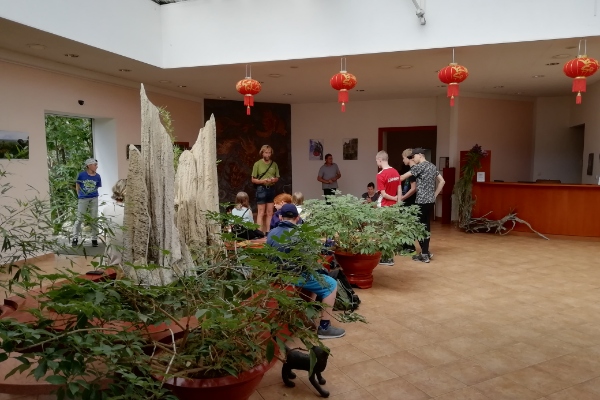 It should foreshadow a “cut” from the European reality therefore the space is loosely styled as a courtyard of a pagoda from Southeast Asia. A small pool with “Buddha fingers”, beautiful stalactites imported from the Vietnam city of Vinh is the main object. Bowls with accompanying greenery Schefflera tamdaonensis and bamboo of the genus Phyllostachys are also original. One of the walls is covered with a ceramic plastic from the well-known Teplice sculptor Milan Žofka. The topic of dragons in storm clouds was inspired by the motives from the imperial tombs in Hué. The other walls are decorated with pictures the author of which is another Teplice artist Petr Reimann. The first is the Tibetan god of abundance and success, from the second, a kind Buddha eye  convex lenses of “heaven” look at the visitors -similar as in the Tay Ninh temple.

Vast areas of the Earth are covered with plant communities which have adapted to the long periods of drought. We have selected some especially attractive ones: Central America, primarily Mexican half deserts, dry mountain areas of South America, western parts of South Africa and arid South of Madagascar. These main areas are supplemented with several smaller ones – a show of flora from the Galapagos Islands, Arabia and rare vegetation of the Socotra Island which is situated in the Arabian Sea between Yemen and Somalia. Mexican pueblo is a striking artefact in this greenhouse from which pleasant music wafts.
In a lot of botanic gardens similar exposures are based on collections of cacti. We definitely have not excluded these beautiful plants but we have tried to create – as well as in all greenhouses more complex view, some artistic abbreviation of natural reality where also trees, shrubs, bulbs and annuals play important role.

Tropical rain forest and hot, all year round humid monsoon areas are covered with the richest plant communities of our planet. At the entrance to the tropical greenhouse there is a Pacific exposure in the broadest sense of the word (from Hawaii to Tahiti), where original Hawaiian species of hibiscus as well as modern large-flowered cultivars Hibiscus rosa-sinensis succeeded. Breadfruit trees Artocarpus incisa create a dominant of this part. An exposure of tropical Africa is not very big followed by a show of humid Northern Madagascar with the “palm of pilgrims“ Ravenala madagascariensis. The Asian part is introduced by a huge waterfall created by M. Žofka and the model of the biggest bloom in the world is exhibited – parasitic rafflesia Rafflesia arnoldii. The exposure of tropical America covers the largest area of the greenhouse the Central American part of which is diversified with “the forest-absorbed ruins of the Mexican pyramid“. In its neighbourhood there is a little pool with beautiful water turtles (Trachemys scripta elegans). In the greenhouse there is also an orchid show-case supplemented with rare and especially decorative Araceae plants (Araceae), ferns and Bromeliad plants (Bromeliaceae). Elevated view on the tropical rain forest occurs from the bridge the floor of which is built from special bangkirai wood (imported from Malaysia), which comes from the tree of Shorea genus.

The Andes from Mexico to Patagonia, the Himalayas and subtropics of the south-eastern Asia, New Zealand, mountains and eastern part of South Africa with winter rains – that is all we try to introduce in the subtropical greenhouse. The subtropical exposures are diversified in a show-case with quite cold-loving carnivorous plants and orchids and a patio created by a column down which water flows with a star pergola inspired by the travels around Mexico. One of the most valuable plants of the garden grows next to it, it is a hundred year old example of African conifer Afrocarpus gracilior. Perhaps we will point out a small collection of botanic rhododendrons from Vireya subgenus (located against the show-case in the Asian part), which grows between Australia and continental Asia but it is the most numerous in New Guinea and Borneo. They are followed by original subtropical rhododendrons from South China to the left on the slope. Almost all right side is devoted to the temperate valdivian forest situated in Chile and Argentina. You can admire the conifer Chile araucaria (Araucaria araucana), old-age representatives of angiosperms plants of the Drimys genus and other plants collected at the expeditions of the botanic garden.

The rock plants greenhouse is the newest construction subsequent the whole exhibition complex. There are delicate plants from the mountain areas of Europe, Asia, North America, New Zealand and South American Chile planted on the raised tables lining the walls. Other two exhibition tables are situated in the middle and each represents flora of a certain region. First of them is devoted to one of the driest places in the world – the Chilean desert Atacama. The second table may be familiar to some visitors because there are plants from the Canary Islands from which several are endemic for these islands and we won´t find them anywhere else in the world. Four different types of stones are used in the exposure- sandstone, basalt, marlite and rhyolite stones.